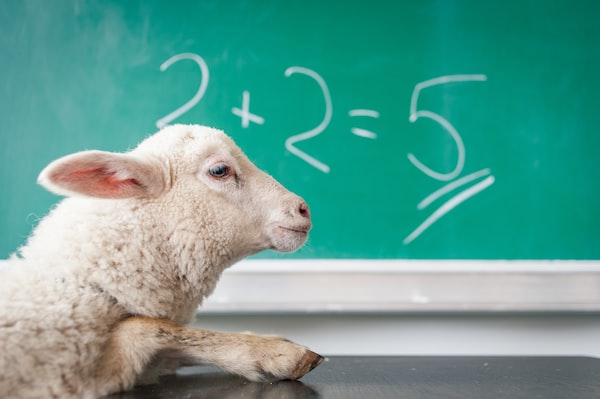 Stupid is the new smart

"Oh that's simple." said one of my colleagues to another. "We'll just minimize the error by using the Jacobian method. It'll be much faster that way. Don't you think?".  "Yes", responded the other.  "Especially considering the thermal and latency requirements, we can't go with…."

Jacobians… Jacobians, I thought to myself. Like Alibaba's cave, the utterance of the word had triggered open a portal through which I could travel back in time. Should I choose to accept it, I had a mission to recover information buried somewhere in the recesses of my brain. Unfortunately on that day, It was truly mission impossible.

I could have asked what he was on about. But I didn't want to sound stupid. Surely, I had to be perceived as an equal, speaking fluently in Greek and Latin symbols while sipping a microwaved cup of tea (blech!).

I'm sure you've been part of these discussions before too. But then, out of the blue, someone else asks the question you've kept locked inside your personal Fort Knox. The second coming of the savior of our your times. All the tension releases. You got the answer you needed and didn't look dumb. Yaay! Right? Hell no.

What is this paralyzing fear of sounding stupid? What's the worst that can happen? It's ok. Amateurs call it stupidity. Masters call it a beginner's mindset.

The reason we're even here in the first place is because we throw that "Oh you're so stupid look" whenever someone asks a stupid question. Oh, don't give me that "Who, me?" puppy eyes look. You know you do it. I do it too.

Turns out, what's easy and obvious to you might not be for many others. Don't dismiss any question as obvious. Appreciate the guts it took to ask it.

If on the other hand, you are the hesitant one, you're not alone. There's a very good chance that many others have the same questions you do, and like you, don't want to appear stupid either. If silence is the preferred language in these circumstances, then, in the end, no one learns anything. The resulting collective ignorance would overflow the Colosseum in Rome (No I didn't measure it).

Now, this wouldn't be a hero's tale if I don't end with how I magnificently reveal my ignorance on a future occasion as fairies and bards sing in a chorus in the background. So here you go.

Approximately 3 months, 1 day, and 4 hours later, said colleague started "The energy minimization formulation isn't correct. We're missing a trick here". I cut across and said, "I'm sorry, can you tell me what we're trying to do here? I don't have a clue, sorry". Never have I felt more relieved (I successfully resisted the urge to suggest something might be wrong with the left Phalange).

I stared calmly, eloquently, as my colleague went through the 5 stages of astonishment - Denial, Shock, Suspicion, Analysis, and Acceptance. Then he clarified what he was on about. I stood 10 feet taller that day.

"Better to remain silent and be thought a fool than to speak and remove all doubt".

I disagree. It should be

"Better to speak up and remove all doubt than be silent and remain a fool".